Prosthetic knees are designed to mimic the bending (flexion) and swinging (extension) of the anatomical knee joint as a patient walks. From advanced computer-controlled components to simple locking joints, the prosthetic knee works together with the prosthetic foot and socket to achieve a smooth gait pattern. 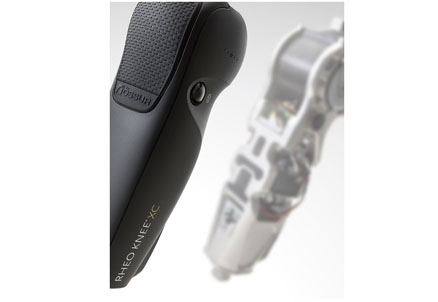 Prosthetic knee joints are also classified by the way that the bending and swinging of the knee joint is controlled. There are two general classifications, however some knee joints incorporate combinations of these controls.

Hydraulic / Pneumatic Control:Hydraulic (fluid) and pneumatic (air) controlled knees have inner chambers that regulate the bending and/or swinging of the knee at different walking speeds. These knees are best for patients with higher activity levels and frequent changes of speed.

Mechanical Friction: The friction (resistance to bending) in the knee joint is typically adjusted by tightening a bolt. Often, a spring is used to help the knee straighten before the foot hits the ground during walking. A mechanical friction knee bends when as the user naturally walks as the toe of the prosthetic foot is properly loaded.

Weight Activated Stance: Weight activated stance control knee features a braking mechanism preventing the knee from bending as long as the user has weight on the prosthesis. These knees are typically feature a single axis design and are very safe, simple, lightweight and fairly inexpensive. One of the disadvantages is that all of the user’s weight must be removed from the prosthesis to unlock the knee to enable sitting.

Microprocessor Controlled Knee (MPK): Advanced computer-controlled knee units provide the maximum safety for trans-femoral amputees. MPK knees feature an onboard micro-processor that receives feedback from sensors inside the joint to “learn” or “react” to the user’s walking characteristics and adjust the stiffness of the knee to adjust for different walking speeds, terrain and situations. Your prosthetist is able to adjust the parameters of control using a laptop or tablet to fine tune the characteristics of the knee.

This is a property of Ktwo Healthcare Pvt. Ltd. Company and all rights are reserved.
© All Rights Reserved - 2019. Designed by Mars Web Solution.